Hit enter to search or ESC to close

Land Use Control Board Recommends Rejection On Frayser Landfill Expansion 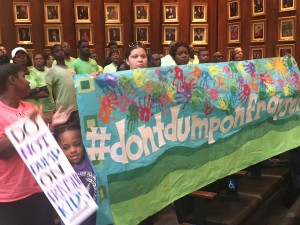 An application filed by Memphis Wrecking Company to expand a landfill located in Frayser was just rejected by the Shelby County Land Use Control Board (LUCB).

For the past several months, Neighborhood Preservation, Inc. (NPI) along with various stakeholders, leaders and residents of the Frayser community , have led an opposition effort to defeat the landfill expansion. Community leaders are citing concerns with its proximity to schools, a youth-led organic farm, established neighborhoods and other community assets in addition to the adverse effects the expansion would have on overall neighborhood quality of life and value.

“The vote by the Land Use Control Board for rejection of the landfill expansion is a big win for the Frayser community,” said Steve Barlow, Executive Director of Neighborhood Preservation, Inc.

“Residents in Frayser are frankly tired of getting dumped on, and we’re happy to see that the staff of the Office of Planning and Development recommended rejection and the and members of the LUCB voted unanimously to rejection this expansion application.”

Since 2012, NPI has worked aggressively on blight elimination through strategic litigation and advocacy and is recognized as a premiere blight fighting organization in Memphis. In the Frayser community, the non-profit has provided legal and financial resources to support ongoing neighborhood improvements and revitalization.

Leaders of the Frasyer Community Development Corporation, Girls Inc. and Whitney Achievement Elementary School are also instrumental in leading opposition against the landfill expansion, which if approved would double its current size.   The campaign – #DontDumpOnFrayser – is a grassroots campaign that gained traction through broad involvement from Frayser residents and youth.

Securing the vote to reject this application from LUCB was the first hurdle that NPI and Frayser leaders worked to overcome.  The applicant, Memphis Wrecking Company, has the option to appeal this decision to the Memphis City Council.  NPI and the other Frayser stakeholders are committed to continue advocating for a stronger Frayser community and are prepared to continue advocacy efforts.